Its the third largest sector in the global entertainment industry (Yes movies and music come on top)…and has a massive double digit growth beating other giants in the industry, recording a revenue of $41 billion for 2008.  A multi-discipline realm of professionals including biologists, physicians, artists, musicians and programmers, 25000+ people all over the world, making other people’s imaginations a reality. Yes it is The Interactive Entertainment Industry or most popularly known as Video Gaming.

Sri Lanka has a youth gaming community sizing over 10000 specially in cities like Colombo, Kandy and Kurunegala as hardcore gamers and thousands more all over the island as fans and followers of PC, mobile and console gaming. Annually they get to meet each other and compete to the heart’s content at events like “Srilankan Cyber Games”. But until now Sri Lanka never had a gaming magazine. Print or electronic media never considered it as a serious form of entertainment. The popularity of gaming among kids, youth and young-at-heart urged for a voice…. until now.

Bunch of friends got together to create the Sri Lanka’s first ever gaming magazine, The Gamer. And its the second of its kind in South Asia. With strategy guides, reviews, gaming events,competitions and new releases it will cater to the gaming community of Sri Lanka and beyond. The first issue was out in September and it was available in all leading book stores such as Vijitha Yapa, MD Gunasena, Sarasavi, etc. and in popular gaming cafes and DVD stores as well. And if you are lucky enough, you will still be able to grab your self a copy left. This inaugural issue of ‘The Gamer’ features newly released NFS: Shift and many more hot titles including Majesty 2, Colin McRae Rally: Dirt 2, Resident Evil 5. A special strategy guide on FIFA 09, Reviews on The Sims 3, World of Goo etc is also included. Since The Gamer’s intention is to bring forth & expose the gaming community to the general public as well to increase the awareness of the Sri Lankan enthusiasts regarding the latest developments in the international gaming arena, this issue covers the news on World Cyber Games – Sri Lankan Preliminaries too.

Ahhh… and I almost forgot to mention I write about FOSS (and specially Linux) games for ‘The Gamer’. 😉

These days we are getting ready to publish the second issue of ‘The Gamer’ – the follow-up to a great success seeing almost all 1500 copies sold. If you like to contribute to the magazine’s future issues with articles please drop a mail to edit.gamer@gmail.com
If you wish to contribute in any other way or to find out more about advertising opportunities in ‘The Gamer’ contact mkt.gamer@gmail.com 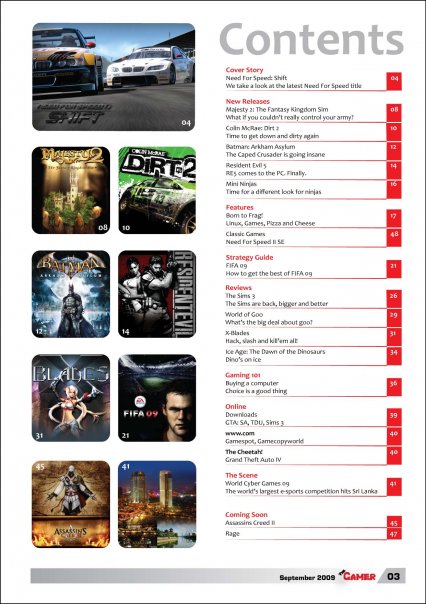 From silent self-confidence to a vociferate outburst